The Finnish company Nokia was once known for its rubber boots – and for its indestructible and power-saving cell phones. A lot has changed in the meantime, but smartphones and cell phones are still part of the manufacturer’s portfolio. We present an overview of the current Nokia models.

With the smartphone boom, the phone manufacturer from Espoo near Helsinki, whose factories are spread around the globe, was quiet for a while. In 2010, every third cell phone sold worldwide came from its factories.

Although the company itself was a co-inventor of the smartphone with its Nokia 9000 Communicator from 1996, the Finns misinterpreted Apple’s first iPhone from 2008 as a nice gimmick and missed the trend toward intuitive, powerful smartphones with large touchscreens instead of cursor-controlled input via mini-keyboard. The Symbian operating system used in Nokia models at that time was simply not designed for this.

After turbulent years and a sale of the cell phone division to Microsoft, the Nokia cell phone brand is now in the hands of the likewise Finnish manufacturer HMD Global, which was founded by former Nokia managers. This was also accompanied by a switch from Microsoft’s Windows Phone/Windows Mobile operating system to Google’s Android family for all new smartphones. After re-entering the phone market in 2016, there is now a considerable lineup of Nokia devices for almost every purpose.

The new Nokia models are divided into the two product families smartphones and feature phones. The manufacturer currently has a total of 9 devices in its lineup, including 5 smartphones and 4 feature phones. Feature phones are cell phones that allow you to do more than just make calls, but unlike smartphones, they have a smaller screen without a touch function and less powerful processors. They are less suitable for surfing, watching movies or editing pictures, have smaller cameras and therefore also start with other operating systems. For example, with KaiOS, the successor of the Linux-based FirefoxOS. There are usually numeric keypads under their half-height screen for input. The resulting design earned this device class its name Candy Bar. 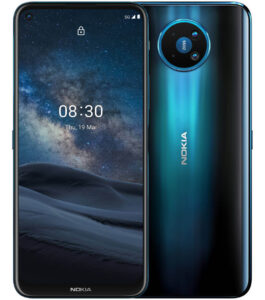 The Finn’s top model is the Nokia 8.3 5G, which, as the name suggests, supports the 5G mobile standard. The device is operated via a 6.81-inch touchscreen. It has a resolution of 2400 x 1080 pixels in 19:9 format. The petrol-black smartphone with a casing made of Gorilla Glass and aluminum not only shines with its elegant shimmering finish in dark polar night tones, but also with its good build quality.

The heart of the device is a Snapdragon 765G underneath the IPS display, which is supported by an Adreno 620 graphics processor. With either 6 or 8 GB of RAM and an internal storage of 32 or 64 GB, the device can easily hold your photo library from the last vacation.

A so-called hybrid slot allows either inserting a second SIM card or expanding the storage to 512 GB via microSD card. Four cameras with between 2 and 64 MP are on the back, while the selfie camera on the front has an image sensor for up to 24 MP. While market leaders like Apple and Samsung have said goodbye to the unloved jack plug for the headset connection, Nokia sticks to the 3.5 mm jack. 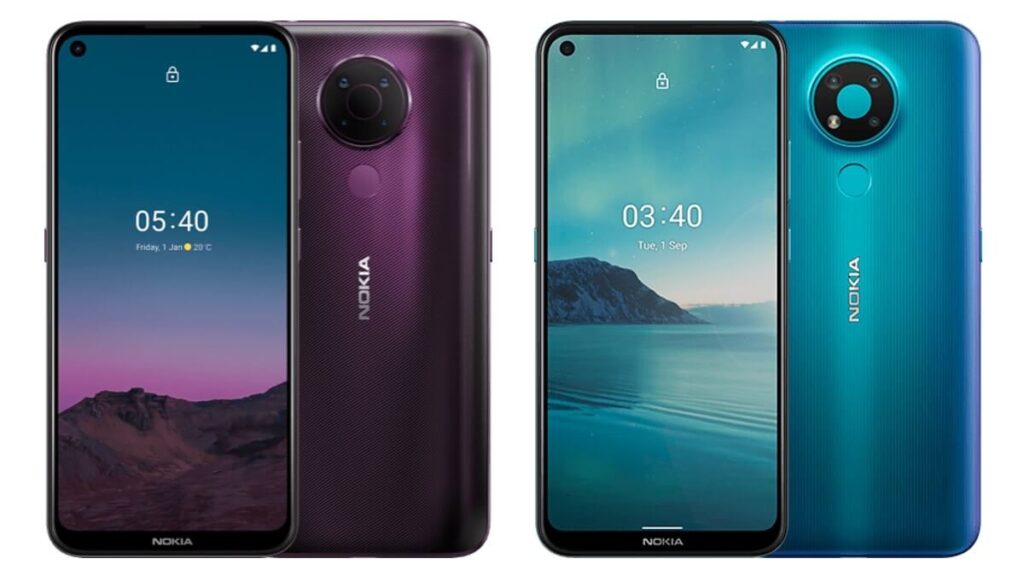 Instead of a Qualcomm processor, a MediaTek Helio P22 serves as the computing powerhouse. Nokia’s 2.4 has a 13 MP camera on the back and portrays you with its 5 MP front-facing camera if desired. 32 GB of internal storage and 2 GB of RAM serve as the device’s long-term and short-term memory. As with all other Nokia smartphones, a 3.5 mm input for headphones is also on board.

At 195 grams, it barely weighs more than its two mid-range siblings, but has a 6.5-inch display.

The entry-level smartphone from Nokia

The entry-level model among Nokia’s smartphones is logically named Nokia 1.4. Its 6.51-inch HD Plus display with a resolution of 1600 x 720 pixels is housed in a 166 x 77 x 8.7 mm plastic casing. It thus weighs 178 grams on the scales. Nokia’s 1.4 has a 3.5 mm headphone jack and 1 GB of RAM and 16 GB of storage in Germany, while other countries sometimes use different storage sizes.

A Qualcomm Snapdragon 215 quad-core processor is used for sufficient computing power. Like its bigger siblings, the device can be conveniently locked and unlocked via fingerprint. Nokia’s 1.4 runs the Android 10 operating system in the Go Edition, which is optimized for smaller smartphones and includes optional parental controls for browsing. An upgrade to Android 11 should also be possible. If there were a category of children’s or student smartphones, Nokia’s 1.4 would be an ideal representative in terms of features and price.

The feature phones from Nokia

The Nokia 8000 4G, the Nokia 225 4G and the Nokia 800 Tough are devices in the classic candy bar design. The epithet Tough is to be taken literally here, because this device is a so-called construction site or outdoor cell phone with a shock-resistant case and rubberized keys. All three phones understand the 4G mobile standard and have a camera and dual-SIM support. Like the current Nokia smartphones, this trio runs Google’s Android and comes with corresponding apps for typical basic functions. 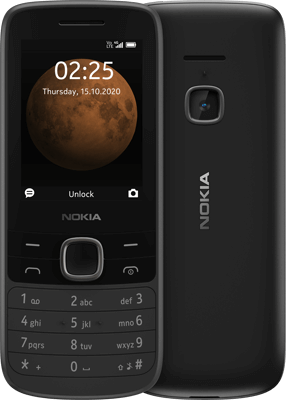 The fourth feature phone in the series is the Nokia 2720 Flip. This is a flip phone with a 2.8-inch color display with 320 x 240 pixels and 4 GB of internal memory. The Finns had already caused nostalgia in the market once in 2018 with their strikingly curved sliding phone 8110, and the Nokia 2720 Flip is correspondingly reminiscent of the iconic look and feel of the turn of the millennium.

Matching the retro styling of the device are its removable battery and the black and white front display. The Google Assistant button can optionally be configured as an emergency call button. This and the eyeglass-friendly, uncluttered keyboard make the device a typical candidate for the senior cell phone category.

The fourth feature phone in the series is the Nokia 2720 Flip. This is a flip phone with a 2.8-inch color display with 320 x 240 pixels and 4 GB of internal memory. The Finns had already caused nostalgia in the market once in 2018 with their strikingly curved sliding phone 8110, and the Nokia 2720 Flip is correspondingly reminiscent of the iconic look and feel of the turn of the millennium.

Matching the retro styling of the device are its removable battery and the black and white front display. The Google Assistant button can optionally be configured as an emergency call button. This and the eyeglass-friendly, uncluttered keyboard make the device a typical candidate for the senior cell phone category.

Phones 0
Still ridiculed a few years ago, smartphones from China are now competing seriously with

Marketing 0
iPhones have long had the reputation of being almost indestructible. They are completely unimpressed

Phones 0
Your cell phone no longer charges? When the battery goes on strike, there can

Phones 0
Running a cell phone with two SIM cards can be quite convenient, however, many

Phones 0
Do you know this? You try in vain to reach your (grand)parents because they